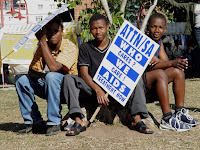 DURBAN, 22 June 2011 (PlusNews) -
Thirty years after the discovery of AIDS, conspiracy theories that posit the virus as man-made continue to enjoy support among a segment of South African youth - and these beliefs may be putting them at greater risk of HIV infection.

A representative survey of more than 3,000 South Africans between the ages of 20 and 29 years in the greater Cape Town area has found that black South Africans were eight times more likely to believe AIDS conspiracy theories, specifically that scientists engineered HIV.

Among black respondents, 20 percent believed that HIV was man-made and created by scientists as an attack on people of African descent, according to a University of Cape Town (UCT) study.

New research by Nicoli Nattrass, director of the AIDS and Society Research Unit at UCT, also found that AIDS conspiracy believers are 50 percent less likely to report having used a condom the last time they had sex than non-believers. Respondents with traditional values, and those who had lower socio-economic status but were not religious, were more likely to believe there was a conspiracy.

The Nattrass research, co-authored with colleague, Eduard Grebe and presented at the 1st HIV Social Sciences and Humanities Conference in Durban, South Africa, also showed that people who had heard of the Treatment Action Campaign(TAC), a South African AIDS lobby group, were much less likely to believe a conspiracy existed and twice as likely to use condoms.

"We picked up the effect of TAC in counteracting conspiracy theories," Nattrass told IRIN/PlusNews. "It's another way to show the importance of civil society resistance to the [former] government."

The research will be included in a forthcoming book by Nattrass on the effects and history of AIDS conspiracy theories, and their origins as a Cold War propaganda tool by the East German state security service, known as Stasi, and the national security agency of the former Soviet Union, the KGB.

The conspiracy theories were then taken up by right-wing white supremacists in the US and expounded in a book, "Behold the Pale Horse", excerpts of which were circulated by Tshabalala-Msimang to her nine provincial counterparts, according to Nattrass.

Given the deep distrust of Western science, and the history of racial oppression of African Americans and black South Africans, Nattrass said it was understandable that the prevalence of AIDS conspiracy beliefs would be higher in segments of both these populations.

"There's definitely a racialized aspect to this," Nattrass told IRIN/PlusNews. "Most anthropologists tend to look at it as a narrative of resistance against stigmatization; against imperialist discourses by policy-makers."

In a review of existing research on the prevalence of AIDS conspiracy beliefs by Nattrass, up to 80 percent of surveyed African-American respondents believed HIV was man-made. US studies have found a strong link between AIDS conspiracy theories and lack of condom use, not testing for HIV and not adhering to antiretroviral (ARV) treatment. In South Africa such theories have been associated with never testing for HIV.

Conspiracy theories may have gained traction in South Africa after the apartheid government's biological warfare programme, code named "Project Coast", was exposed. Local newspapers dubbed the former head of South Africa’s secret chemical and biological warfare project, Dr Wouter Basson, as "Dr Death” for his alleged role in the deaths of anti-apartheid activists, and he was eventually tried but acquitted of murder due to insufficient evidence in 2001.

Nattrass said the revelations about government-sponsored biological warfare programmes had made the notion of a man-made virus more believable to some.

“There’s some very nice ethnography work that shows that the stories that were put out by the press [at the time of Basson’s trial] were picked up in certain communities and twisted to form [theories like], ‘Well it must have been Wouter Basson, who, together with the Americans, was part of creating HIV in South Africa.”

But Nattrass cautioned that history wasn’t everything, and that leaders such as TAC, Tshabalala-Msimang, and former President Thabo Mbeki, also played a role in shaping people’s beliefs.

Former President Thabo Mbeki’s denialist stance has also fuelled local conspiracy theories. Drawing on the work of prominent AIDS denialists, Mbeki questioned whether HIV causes AIDS, arguing that a variety of other factors, including poverty, were to blame.

In 2000 he told members of the ruling African National Congress party that the US Central Intelligence Agency (CIA), working with large pharmaceutical companies, was part of a conspiracy to promote the view that HIV causes AIDS.

His distrust of ARV medicines delayed plans for the widespread public rollout of the life-prolonging drugs until November 2003, despite years of research establishing that they reduced AIDS-related deaths.

In a discussion on the research, Prof Alan Whiteside, director of the Health Economics and HIV/AIDS Research Division (HEARD) at the University of KwaZulu-Natal, suggested that people reporting low condom use might say they believed AIDS conspiracy theories to justify their low condom use.

Nattrass agreed that there was a correlation between these beliefs and low condom use, but said it was not necessarily a cause-and-effect scenario.

"Several recent studies show that there's an association between believing in conspiracies and reduced likelihood of using condoms, or having an HIV test or adhering to antiretrovirals," said Clara Rubincam, of the London School of Economics and Political Science, who conducted related research with focus-group participants drawn from the Nattrass sample.

"Given the relevance of conspiracy theories to the successful design of HIV prevention and treatment, it's important to study the extent to which they are believed, and why they continue to be believed," Rubincam told IRIN/PlusNews.

The focus group discussions revealed that while many participants thought HIV was man-made, many others attributed South Africa's HIV epidemic to behaviour and socio-economic factors such as poverty, which they felt made more people vulnerable to HIV.

Many also did not understand the science of HIV treatment, mistakenly thinking that HIV prevention methods like prevention of mother-to-child transmission (PMTCT) indicated the availability of a "cure" for HIV.

Rubincam said there may be a need to better explain how PMTCT prevents, but does not cure, HIV infection in babies born to HIV-positive mothers, so as to dispel such misconceptions.

"It's tempting to believe that... perhaps with the end of the Mbeki administration, the problems of AIDS denialism and conspiracy theorising might be over," Rubincam commented. "That doesn't seem to be the case."
Posted by Seth Kalichman at 5:37 PM