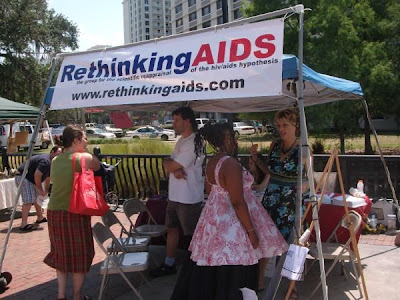 Christine Maggiore, the most visible AIDS denialist activist, died last December. As posted here and in many places, her death was no mystery. Having tested HIV positive in 1992 and refusing modern medical care, Christine Maggiore died from complications of AIDS. At the time we knew her death involved her suffering from pneumonia. We now know from her death certificate that the immediate cause of her death was disseminated herpes viral infection. This disease is so specific to CD4 cell loss it almost never occurs outside of HIV infection. Her bilateral bronchial pneumonia was an underlying condition that contributed to her death. Essentially, Christine Maggiore’s immune system collapsed. She was under the care of Ilona Abraham, a provider who had earned their degree from the Semmelweis University, the same Semmelweis that has not so clean hands having recently given Peter Duesberg and Celia Farber awards for their truthiness on AIDS. Christine Maggiore was a denialist to the end, choosing a provider who specializes in the use of chelation, mercury detoxification, homeopathy, and nutritional supplements rather than a modern medical doctor who may have actually been able to help her.

In yet another development in the sad story of Christine Maggiore, her husband Robin Scovill has settled their lawsuit against the Los Angeles Coroner’s office for allegedly erring when it determined their 3-year-old daughter Eliza Jane had died of AIDS-related causes.
According to the LA Times "The lawsuit demanded up to $10,000 for each violation of Eliza Jane's right to privacy, plus unspecified damages". The case was settled for $15,000. This ends another chapter in the saga of Christine Maggiore.

These sad details, as undeniable as they are, will mean nothing to AIDS denialists. The life and death of Christine Maggiore continues to inspire them to turn away from medicine and science. That is why, after all, it is called denialism.
UPDATE: How do AIDS denialists deny the undeniable? Visit AIDS Myth Exposed Forums and find out. Try this one on for size...