The Power of Ideas by Ben Goldacre 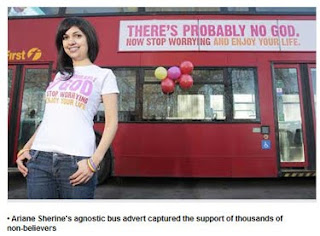 The Power of Ideas
by Ben Goldacre published in Ariane Sherine's book There's Probably No God: The Atheist's Guide to Christmas, with all contributor proceeds donated to the Terrance Higgins Trust, UK's leading HIV and sexual health charity.

I don’t mean to fill your Christmas with AIDS and diarrhoea, but there is something awe-inspiring about the power of ideas alone to do great good, and great evil. Diarrhoea will be our happy ending. AIDS will not.

There are the cheap shots. Africa is filled with miracle-cure peddlers: the Gambian president, Yahya Jammeh, claims he can personally cure HIV, AIDS and asthma using magic and charms. The South African government fell for a cure built around nothing more than industrial solvent.

It’s all too easy to feel smug, and to forget that we have our own cultural idiosyncrasies. There’s compelling evidence, after all, that needle-exchange programmes reduce the spread of HIV, but the strategy has been rejected, time and again, in favour of ‘Just say no.’

And then there is the Church. In May 2009, as I write this chapter, the Congolese Bishops’ Conference have triumphantly announced that they ‘say no to condoms!’ This idiocy – they don’t deserve to be humoured – goes to the heart of the Catholic faith. In March, on his flight to Cameroon, Pope Benedict XVI explained that condoms worsen the AIDS problem, and he has been supported, in the past year alone, by Cardinal George Pell of Sydney, Australia, and Cardinal Cormac Murphy O’Connor, the Archbishop of Westminster. ‘It is quite ridiculous to go on about AIDS in Africa and condoms, and the Catholic Church,’ says O’Connor. ‘I talk to priests who say, “My diocese is flooded with condoms and there is more AIDS because of them.”’

Some have been imaginative in promoting their message. In 2007, Archbishop Francisco Chimoio of Mozambique announced that European condom manufacturers are deliberately infecting condoms with HIV to spread AIDS in Africa. It is estimated that one in six people in Mozambique is HIV positive. Cardinal Alfonso López Trujillo of Colombia famously claimed that the HIV virus can pass through tiny holes in the rubber of condoms. ‘The condom is a cork,’ said Bishop Demetrio Fernandez of Spain, ‘and not always effective.’ In 2005 Bishop Elio Sgreccia, president of the Pontifical Academy for Life, explained that scientific research has never proven that condoms ‘immunise against infection’. He’s right, I suppose. No wonder the Pope has proclaimed that ‘The most effective presence on the front in the battle against HIV/AIDS is in fact the Catholic Church and her institutions.’

Development charities funded by US Christian groups refuse to engage with birth control, and any suggestion of abortion, even in countries where being in control of your own fertility could mean the difference between success and failure in life, is met with a cold, pious stare. These moral principles are so deeply entrenched that under President Bush, the US Presidential Emergency Plan for AIDS Relief insisted that every recipient of international aid money must sign a declaration expressly promising not to have any involvement with sex workers.
Equally, there are heartbreaking tales of Westerners with a whiff of science going into the developing world. Matthias Rath, for example, is a German vitamin-pill salesman, who moved into South Africa five years ago, taking out full-page adverts in national newspapers: ‘The answer to the AIDS epidemic is here,’ he announced. The answer, of course, was a vitamin pill.

He explained that antiretroviral medications were a conspiracy by the pharmaceutical industry to kill patients and make money. ‘Why should South Africans continue to be poisoned?’ he asked.
And he took his ideas to the right place. In South Africa alone, 300,000 people die every year from the virus; that’s one every two minutes. There are 1.2 million AIDS orphans, and more than half of all pregnant women are HIV positive. And South Africa was headed by President Thabo Mbeki, an ‘AIDS dissident’, as they prefer to be known. In the most crucial period of the AIDS epidemic, the South African government variously claimed that HIV was not the cause of AIDS, and that antiretroviral medications were not an effective treatment. They refused to roll out effective antiretroviral medication, they refused to accept gifts of money to give out ARV treatment, and they refused gifts of the pills themselves.

Mbeki’s health minister would appear on television to talk up the risks of antiretroviral medication, and talk down the benefits, promoting garlic and sweet African potato as effective treatments for AIDS. The South African government’s stall at the 2006 World AIDS Conference in Toronto was described by other delegates as ‘the salad stall’, because that’s all it contained. It has been estimated that between 2000 and 2005, around 350,000 people with AIDS died unnecessarily in South Africa as a result of these ideas. That’s quite a death toll, for an idea.
How does this happen? Perhaps AIDS is just too big to think about clearly. Twenty-five million people have died of it so far, three million in the past year, but these figures are so vast that it’s hard to mount an appropriate emotional response to them, if any.

Perhaps the undeniable crimes of the pharmaceutical industry make conspiracy theories about their effective products believable, lending them a kind of poetic truth. They do, after all, adhere to cruel and murderous pricing policies, and only this year, clinical trial regulations were explicitly changed so that clinical trials conducted by American companies on people in the developing world are no longer subject to the same high ethical standards as those conducted on US citizens.

These companies, of course, are not all bad, just as there are many good people in the Catholic Church (the overwhelming majority, I would imagine). And a cheap, single dose of the drug Nevirapine, we should remember, has been shown to reduce the risk of a pregnant mother passing on HIV to her baby by half.

But we are mistaken if we imagine that medicine moves forward through technology. In the past that was probably true: antibiotics, intensive care units – everything we associate with medicine. Now the pace of medical academic discovery has changed, and the power lies with ideas.

So let me tell you about diarrhoea. What are our two biggest weapons against torrential watery stool? One is telling people to wash their hands; it’s been demonstrated that this can halve the spread of diarrhoea, and so it could save a million lives a year. The other is even simpler, and even more powerful: telling people to rehydrate, using water with added sugar and salt. This is new, it has been carefully researched and refined, and despite being a simple idea, which anyone can follow, this meme has caused deaths from diarrhoea to plummet, saving at least fifty million lives since its universal adoption in the 1980s.

We can go higher. A hundred million people died in the last century from smoking. Around a billion are expected to die this century (because the cigarette industry has been so successful in China). But equally, tens of millions of lives will be saved, because Richard Doll and colleagues diligently collected and analysed data on the smoking habits and deaths of a few thousand doctors fifty years ago to pull out just one key fact: smoking kills.

With this idea, with handwashing, with rehydration fluid, and with the methods and principles that gave us these ideas, a small group of softly spoken saints have saved more people than you would meet in a thousand lifetimes.

The royalties from this book will go to Terrence Higgins Trust. I have seen the work they do up close, working in an HIV clinic in South London. THT offer practical support, but the most powerful work they do, to my mind, is in sharing information, destigmatising, informing, preventing infections and improving treatment regimes. Through the application of common sense, wit, compassion and evidence, they save lives. This is the future of medicine.

Oh, and it’s eight teaspoons of sugar and one of salt in a litre of water, if you ever need to know.

Posted by Seth Kalichman at 1:01 AM