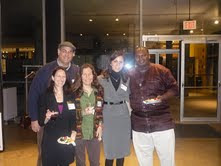 Dr. Stone summed up the days’ events and insights. Definitions: HIV Denialism and Conspiracies. Both HIV denialism and conspiracies are forms of mistrust, but they differ primarily in terms of their origins. HIV denialism consists of mistrust and suspicion of accepted, mainstream scientific research on HIV. A central denialist belief is that HIV does not cause AIDS. Denialists think that HIV research has been corrupted, for example, by drug companies, and the NIH review process. Denialism has been advanced by pseudo-academics and people in power (e.g., professors state leaders, and policymakers), and it has gained momentum through the Internet. As discussed by Drs. Kalichman and Nattrass, denialism may originate with people who have a paranoid, suspicious view of the world; such individuals attempt to spread denialist beliefs to vulnerable others who are searching for explanations for their disadvantaged situations.

HIV conspiracies are characterized by mistrust of mainstream HIV information about HIV’s origins and treatment. A central belief is that HIV was created by the government, CIA, and/or Whites as a form of genocide against disadvantaged groups in society (e.g., African Americans,the poor). Conspiracies are spread in communities, most notably among African Americans and others who are disadvantaged and vulnerable. It is thought that these kinds of beliefs are a response to years of historical and current discrimination within healthcare and society in general. The most well-known example of mistreatment in healthcare is the Tuskegee syphilis study, although everyday chronic discrimination can wear away at people over time and lead to this kind of mistrust and suspicion of the healthcare system and government. HIV denialists find ready audiences among vulnerable people who do not trust mainstream science, and who are therefore open to alternative theories about HIV.

Ideas Matter. The central theme of the symposium was that ideas matter – a phrase from Dr. Nattrass’ book Mortal Combat: AIDS Denialism and the Struggle for Antiretrovirals in South Africa. Bad ideas like HIV denialism have bad consequences – for public policy and for human behaviors. HIV denialism and conspiracies have deadly implications for HIV prevention and treatment, and can contribute to low rates of HIV testing and condom use, unwillingness to use HIV treatment, and nonadherence to HIV treatment.

Addressing Denialism and Conspiracies. Several ideas were advanced for intervention, including using respected community members to spread accurate HIV information; “normalizing” HIV in communities with higher prevalence, by discussing HIV openly and acknowledging conspiracies and the reasons for them; and providing cultural competence training for HIV providers (including education about the existence of denialism and conspiracies). Importantly, solutions must be generated by communities, and community stakeholders must be equal partners in the research process.

Posted by Seth Kalichman at 4:12 PM