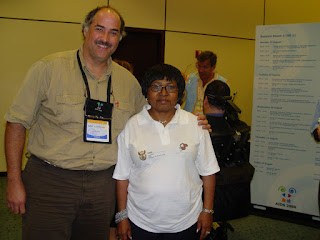 
Tshabalala-Msimang's disastrous HIV policies during her nine years in office made her the most unpopular government minister in post-apartheid South Africa.

She was ridiculed locally and internationally and nicknamed "Dr. Beetroot" — another one of her suggested AIDS remedies — and "Dr. Garlic."

However, she was responsible for some advances. She improved basic services in rural areas, forced down the price of medicine, tried to stem the exodus of doctors and nursesto rich countries, and was one of the driving forces behind a global anti-tobacco treaty.

A former anti-apartheid activist, she spent nearly 30 years in exile.
"We pay homage to this gallant fighter and will forever treasure the contribution she made in the struggle for liberation and the building of our democracy," the ANC said in a statement.

Tshabalala-Msimang had a loyal defender in her close friend, former President Thabo Mbeki, partly because of his own doubts about the link between HIV and AIDS. She was replaced in 2008 after Mbeki was ousted by the ANC.

Tshabalala-Msimang and Mbeki have been blamed for not preventing over 300,000 deaths, according toHarvard University study. There have been calls by activists for them to be charged with genocide.

South Africa, a nation of about 50 million, has the world's largest number of HIV cases with some 5.7 million people infected with the virus.
The country's two subsequenthealth ministers have won praise for breaking with Tshabalala-Msimang's confrontational approach.

Reaction to Tshabalala-Msimang's death was muted and sympathetic.
"We don't wish ill on any human being even though we had a very difficult time with her as minister of health," Vuyiseka Dubula of the Treatment Action Campaign, a group she often clashed with, told the South African Press Association.

AIDS activists blamed Tshabalala-Msimang for spreading confusion aboutAIDS. They won a landmark court case against the ministry in 2002 to force it to provide pregnant women with drugs to stop them infecting their unborn child; and in 2003 to give antiretroviral therapy to people in the more advanced stages of the disease.
Tshabalala-Msimang repeatedly stressed her mistrust of antiretroviral medicine, saying too little was known about the side effects.

"All I am bombarded about is antiretrovirals, antiretrovirals," she said at a 2005 media conference. "There are other things we can be assisted in doing to respond to HIV/AIDS in this country."

Tshabalala-Msimang's recommendation was to use nutritional remedies such as olive oil, the African potato, beetroot, garlic and lemon.

"Raw garlic and a skin of the lemon — not only do they give you a beautiful face and skin but they also protect you from disease," she said.

Her views — which made her a favorite target for cartoonists — reflected mistrust in traditional African societies of "Western" remedies and earned her loyal supporters.
She shrugged off constant calls for her resignation, which reached a crescendo at the August 2006international AIDS conference in Toronto, where the South African stand featured displays of garlic and lemons.

In a devastating speech to the conference, the then-United Nations envoy for AIDS in Africa, Stephen Lewis, slammed the government's policies as "more worthy of a lunatic fringe than of a concerned and compassionate state."

Tshabalala-Msimang continued as a cabinet minister under the caretaker presidency ofKgalema Motlanthewho replaced Mbeki. But she was not given a post after President Jacob Zuma was elected earlier this year.

However, she remained on theANC's national executive committee.

Tshabalala-Msimang was born near Durban Oct. 9, 1940. She completed a Bachelor of Arts degree at Fort Hare in 1962 — just after the African National Congress was banned — and shortly after that was ordered into exile with 27 other students who had been singled out for their leadership potential.

When she said she was leaving for exile, her mother implored: "Please do something for me if I should never see you again — become a medical doctor," according to the Department of Health.

Tshabalala-Msimang graduated from the First Leningrad Medical Institute and then went on to gain a Masters degree in Public Health from the University of Antwerp in Belgium. She worked at hospitals in Tanzania andBotswana and returned toSouth Africa as apartheid was crumbling in 1990.

She was elected to parliament at the first democratic multiparty elections in 1994, was named deputy justice minister in 1996 and health minister in June 1989.
She was married to Mendi Msimang, a former ANC treasurer, and had two daughters.

Funeral details have not yet been announced.