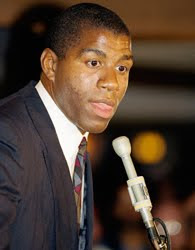 It quickly became apparent that our behavioral surveillance research had ended. Everything that America was thinking about AIDS changed in that moment.
UPDATE: Magic addresses the 2009 National HIV/AIDS Conference in Atlanta
Johnson "acknowledged him being HIV positive has been good for the movement to stop the spread of HIV by being able to raise awareness, but it also has been a “curse.”
I was depressed. Not only had this great man fallen to the scourge of HIV, but my first study as a new faculty member at Loyola of Chicago was screwed.
It was the next day that we realized how we could document what would become known as the Magic Johnson Effect. We could test whether the power of celebrity could change the course of an epidemic. 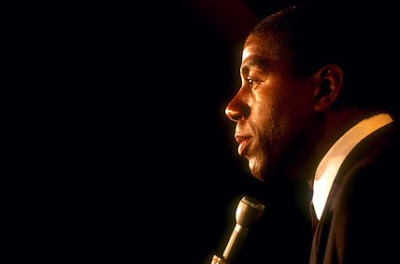 Tricia and I continued data collection and observed huge changes in AIDS attitudes and behavior in Chicago. The most pronounced changes occurred among those who identified closest with Magic Johnson - young men, particularly African American men. We saw dramatic increases in HIV testing that still have not returned to levels pre-November 7 1991. Our results mirrored those of a few other researchers who were in similar positions to compare the world before and after Magic Johnson’s announcement.

A few years later I had the opportunity to ask Magic Johnson for his autograph. He signed our article about the effect that his announcement had on Chicago men and women. Now how Geeky Cool is that?!

Magic said that he would need to start teaching again. And he has lived his promise.

So what do the AIDS Deniers say about the successful treatment of Magic Johnson?

They deny it, of course.

Some AIDS Deniers say Magic is not HIV+.
Gary Null says that Magic Johnson is not HIV positive. “I got this call from Magic Johnson's top person asking would I help Magic Johnson. [We] had a long conversation. I sent him my protocols, by the way. Now, normally I don't go on the record with anyone I help. I've helped over 1300 very famous people, including members of the Royal Family, including people who are chair people of Committees in Congress and Senate….But Magic Johnson, I will go on the record and state that I would like Magic Johnson to have a blood chemistry test where I would tell what he would be tested for, Herpes 1, 2, and 6, and hepatitis. I would like to see, does Magic Johnson have herpes? Because if he has herpes, herpes will test you positive for the HIV virus.”

Some AIDS Deniers say Magic is HIV+ but he is lying about being treated.
“Magic Johnson presents a major problem for HIV dissenters, because he has stated in public that he takes his antiviral cocktail – the HAART regime – dutifully, and does not visibly suffer from fatty lumps and humps. Nor has he collapsed from kidney and liver damage, which dissenters claim is the fate of all who take these AIDS medicines, certainly within the many years that Magic has been taking his medicine after being diagnosed HIV positive. HIV dissenters like to solve the inconsistency with their counter-theory of the dangerous irrelevancy of anti-HIV drugs to AIDS by claiming that Magic has said privately he doesn’t touch the stuff.”

Other AIDS Deniers say Magic is being treated but not with AZT.
For example, Peter Duesberg alleges, Magic Johnson only took AZT briefly but then discontinued using it, and that is why he is healthy.

Magic Johnson has been on combination ‘drug cocktails’ that include AZT. He in fact has taken and promotes the drug Combivir that combines AZT with another antiretroviral. Magic Johnson is thriving on HIV treatments.

Other people with HIV who have refused treatment have not fared so well. Fellow Los Angelean Christine Maggiore refused treatment and died of AIDS-related complications at age 52. Maggiore's AIDS Denial was even impermeable to the Magic Johnson Effect. Now that is what you call denial!

Wishing you many, many more!
Posted by Seth Kalichman at 12:17 AM