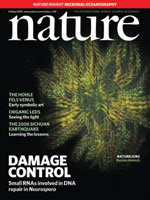 The dangers of denying HIV
by John P. Moore

Inadequate health policies in South Africa have reportedly led to some 330,000 unnecessary AIDS deaths and a spike in infant mortality, according to estimates by South African and US researchers. This carnage exceeds the death toll in Darfur, yet it has received far less
attention. Seth Kalichman, a US clinical psychologist, shows in Denying AIDS how words can kill. His marvellous book should be read alongside Nicoli Nattrass's Mortal Combat, covering similar ground but from the perspective of a South African.
UPDATE: Left Brain Right Brain Autism Blog picks up on the similarities of AIDS denial and autism denial/hysteria.

The tragic events in South Africa have been exacerbated by AIDS 'denialists' who, Kalichman alleges, assert that HIV is harmless and that antiretroviral drugs are toxic. The author discusses the psychology of denialism, which he says is "the outright rejection of science and medicine". He recounts the history of an HIV-infected US woman whose daughter died from an AIDS-related disease, and who recently died herself, to demonstrate the downward path from "ordinary psychological denial to malignant denial to denialism". Kalichman dismisses denialists' attempts to portray themselves as intellectually honourable dissidents who question accepted wisdom. He draws clear distinctions between dissidence and denialism; the latter, he says, is merely a destructive attempt to undermine the science.

These attitudes are not unique to HIV. Denialism, notes Kalichman, is "partly an outgrowth of a more general anti-science and antimedicine movement". Groups that support intelligent design, doubt global warming, claim that vaccines cause autism, argue that cigarettes are safe, believe that the terrorist attacks of 11 September 2001 were an intelligence-agency plot or deny the Holocaust all use similar tactics.

Kalichman asserts that influential groups within the AIDS denialist movement include academics, pushers of 'quack' cures and supportive journalists. He describes the academics involved as "deranged and disgruntled university professors who turn to pseudoscience as a platform to gain attention", noting that pseudoscience may include "sightings of UFOs, alien abductions, astrology, psychic predictions ...[and] outlandish claims about the cause and cure of diseases".

Kalichman describes how quacks, like some of the academics involved, misrepresent their qualifications to create an illusion of authority. One, he claims, treats AIDS with hyperthermia, massage, oxygen, music, colour, gem, aroma, hypnosis, light and magnetic fields, each word followed by "therapy". Another allegedly distributed a product in Zambia called Tetrasil, a pesticide used in swimming pools, until the Zambian government intervened. Kalichman concludes that "taking money from the poor for bogus treatments is beyond criminal" and castigates journalist supporters of the denialist viewpoint for neglecting their professional obligations to verify facts and avoid sensationalist stories. In a powerful ending, Kalichman claims that extreme right-wing politics influences the AIDS denialist movement.

Professional institutions continue to tolerate the conduct of academic denialists, despite the suffering that has resulted. The standard excuse for inaction has been freedom of expression — the First Amendment of the United States Constitution. But free speech has recognized limits, and causing death is one. In 2006, as Kalichman records, a group of concerned scientists and activists created a website, AIDSTruth (

http://www.aidstruth.org/new/), to provide evidence to counter the denialists' words. The international legal and human-rights communities should now investigate the deadly impact of AIDS denialism. Action might have widespread benefits: Paul Offit's tour de force, Autism's False Prophets, claims that pseudoscientists and quacks have used similar tactics to parasitize the suffering of desperate parents by persuading them that vaccines cause autism. As Kalichman says, denialism "will not break until the public is educated to differentiate science from pseudoscience, facts from fraud".

All Royalties from Denying AIDS are donated to buy HIV medications in Africa.

John P. Moore is professor of microbiology and immunology at the Weill Medical College of Cornell University, New York 10021, USA.

Posted by Seth Kalichman at 1:37 AM